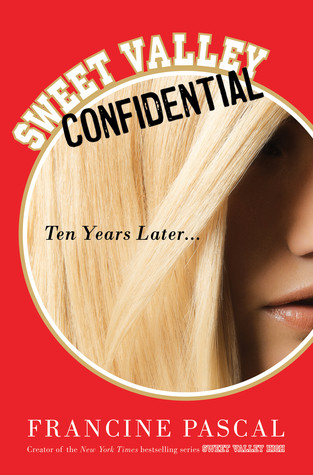 It’s been ten years since the Wakefield twins graduated from Sweet Valley High, and a lot has happened.
For a start, Elizabeth and Jessica have had a falling out of epic proportions, after Jessica committed the ultimate betrayal, and this time it looks like Elizabeth will never be able to forgive her.
Suddenly Sweet Valley isn’t big enough for the two of them, so Elizabeth has fled to New York to immerse herself in her lifelong dream of becoming a serious reporter, leaving a guilt-stricken Jessica contemplating the unthinkable: life without her sister.
Despite the distance between them, the sisters are never far from each other’s thoughts. Jessica longs for forgiveness, but Elizabeth can’t forget her twin’s duplicity. Uncharacteristically, she decides the only way to heal her broken heart is to get revenge. Always the ‘good’ twin, the one getting her headstrong sister out of trouble, Elizabeth is now about to turn the tables…

If you spent some of your teenage years reading about Elizabeth and Jessica Wakefield and would like to know what happens to everyone in the end, then this book is for you. (But please note, I only read about the first thirty books in the series, if you have read them all, and the spin off series’ too, you may have an entirely different view on this final episode.).

As Francine Pascal, who wrote the original stories, has written this one, the style has a very familiar feel, and is definitely what I would call an ‘easy read’. There are some new characters, but the focus of the story remains on the twins and their friends.

Interestingly, it is Elizabeth who has departed Sweet Valley for New York and is trying to get her career off the ground while Jessica is at home…with Todd! Through first person narrative from both Elizabeth and Jessica, and flashbacks and past memories we gradually discover how this has come to pass, and who is going to be with whom in the future. It is a great premise for all followers of the Wakefield twins to enjoy and does come with some unexpected twists and turns along the way. Although not dark in any way, it is true to say that this book has moved on from the innocence of the originals. Things no longer stop at a goodnight kiss, and there are some character developments that would not have featured in the Young Adult novels.

The best part is at the end when there is an epilogue that covers what happens to everyone, so no stone is left unturned. If you don’t want to know what happens, don’t look at the end first, I had to resist the temptation to do this standing in the shop!

Verdict: For me a guilty pleasure, I really enjoyed it! But probably not something I will read again now I know what happens.